Open 11am until late

Located in the centre of downtown Banff, Wild Bills Legendary Saloon is a longstanding institution serving heart-warming, western hospitality and the best BBQ and country comfort food in Banff.  With the ability to host groups of 10-500 people in over 11,000 square feet of event space, Wild Bill’s is Banff’s premier off-site venue.   Offering three distinct, main level bars, a number of flat screen TV’s, high-definition projector and screen and access to state of the art production equipment along with Banff’s largest dance floor and only Mechanical Bull, Wild Bill’s Legendary Saloon is the leading choice for off-site functions in Banff. 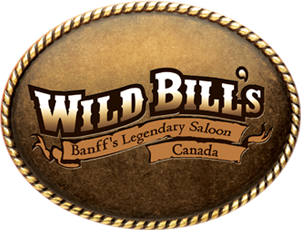 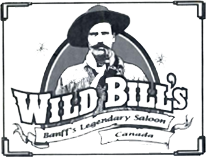 “wild” Bill Peyto was a pioneer, mountain guide, and early park warden of Banff national Park. Peyto lived in England before immigrating to Canada, arriving in February, 1887, to find his way to the Canadian rocky Mountains where he initially worked as a railway labourer. By the mid-1890s Peyto had built a small log cabin close to the Bow river where he kept his outfitting and trapping gear. Peyto worked as a park warden in the Banff national Park from 1913 until his retirement in 1936, with his duties interrupted by his service in the First world war.

Most known for his services as a guide, Peyto was chosen to lead many prominent British, Swiss and American climbers on multiple expeditions in the Canadian rockies. Bill has many fine performances to his credit, including leading the first party to climb Mount Assiniboine. He was a very unique character, donning his signature sombrero, white kerchief (which apparently served often as a napkin), and buckskin coat with fringe border. Like many outdoors men, he valued his personal space—one Saturday night he walked into a crowded Banff hotel with a live lynx strapped to his back. A few moments later he found himself alone in the bar… just as he liked it.

Bill Peyto is one of the oldest and most colourful links with the early days of western Canada. One of the leading lights of the brotherhood of guides and packers who flourished at the turn of the century, Bill’s knowledge of the mountains that surround us was surpassed by few. Described as utterly fearless, Bill was at all times willing to assume any risk to safeguard those in his charge. His large photograph prominently marks the entrance to the town of Banff, Alberta. Peyto Glacier on the Continental Divide and Peyto Lake are named in his honour.